Analytics databases and data visualization are like hand in glove, adding tremendous value when used together. SQL queries return numbers, whereas visualizations make those numbers easy to digest at first glance, confirming the proverbial picture speaks a thousand words.

Apache Pinot, a real-time OLAP database, works with numerous BI tools to produce beautiful visualizations, including Apache Superset and Tableau. This article explores how Pinot can be integrated with Redash, another popular open-source tool for data visualization and BI.

Redash natively integrates with many relational and NoSQL databases out there. Apart from that, Redash allows you to use a Python script as a data source, enabling you to populate the visualizations by running the script.

At the time of writing this, Apache Pinot doesn’t have a direct integration with Redash. Therefore, we will use Python script to write our queries and populate a dashboard.

To keep things simple, let’s spin up an Apache Pinot Docker container in quick start mode to run our queries against the baseballStats table directly.

We will write queries to produce the following metrics:

Once we figure out the queries, we can write Python code in Redash to generate the required charts.

First, you will need to clone the Redash Git repository:

Redash requires several environment variables for operation. Create a .env file at the root and add the following content.

Note that the variable REDASH_COOKIE_SECRET must be set before you start Redash. The value of it can be anything. But there are some recommendations to follow.

We are going to query Pinot using Python scripts. Hence, the REDASH_ADDITIONAL_QUERY_RUNNERS is set to redash.query_runner.python.

Once you have the above set up, start the Docker container by running:

That will build the Docker images, fetch some prebuilt images, and then start the services (Redash web server, worker, PostgreSQL, and Redis). You can refer to the docker-compose.yml file to see the complete configuration.

If you hit an errno 137 or errno 134, particularly at RUN yarn build, give your Docker VM more memory (At least 4GB).

If this command fails, a possible reason could be that you are running a newer version of Node. You can fix that by changing the Node version in the package.json file to match your Node version.

Populate the Redash database by running the following command:

We still need to build the frontend assets at least once, as some of them are used for static pages (Redash login page and such):

Once all Docker services are running, Redash is available at http://localhost:5000/ and should display the setup page as follows. 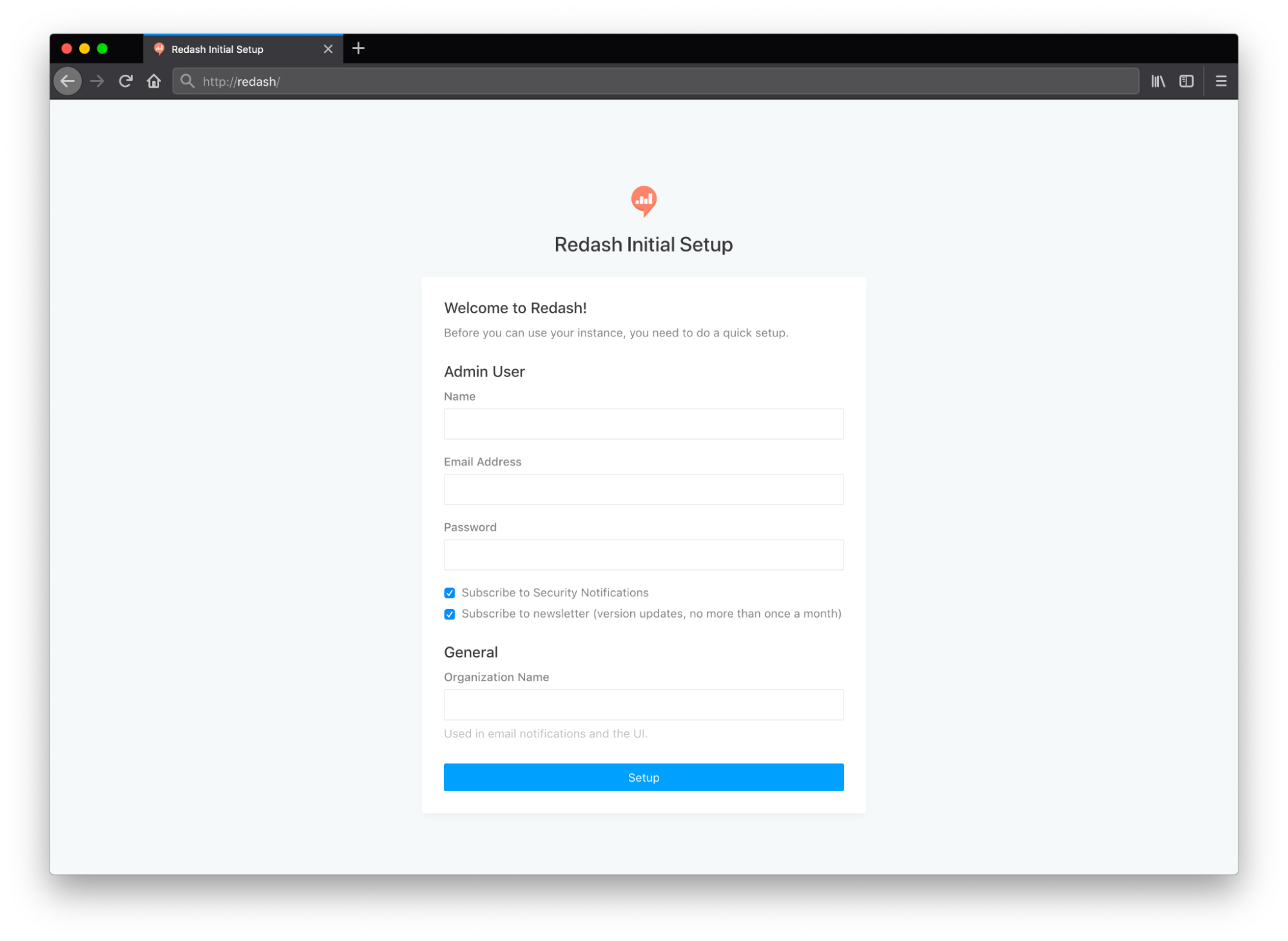 Provide the admin username, email address, password, and organization name to proceed with this screen.

If you follow everything correctly, you should see a screen similar to this. 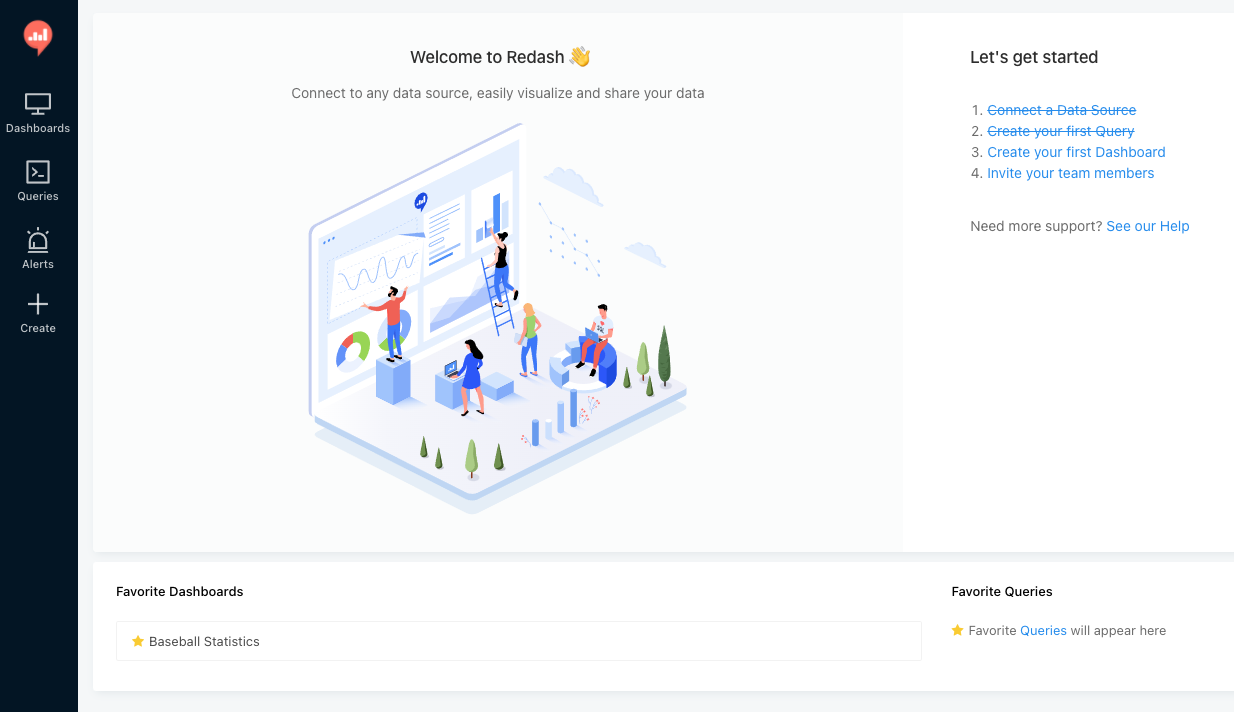 If you run into any issues during the installation, you can refer to this guide.

Now that you have a running Redash instance. The next step is to configure Redash to query Pinot.

Apache Pinot provides pinotdb, a Python client library to query Pinot from Python applications. We will install pinotdb inside the Redash worker instance so that it will be able to make network calls to Pinot from there.

Navigate to the root directory where you’ve cloned Redash. Execute the following command to get the name of the Redash worker container.

Assuming the worker’s name is redash_worker_1, run the below commands to install pinotdb.

Restart the Docker stack after installation.

The Python query runner lets you run arbitrary Python 3 scripts and visualize the contents of a result variable declared in the script. The data source screen asks for three inputs.

Add pinotdb into the first text box as follows. Leave the others blank. 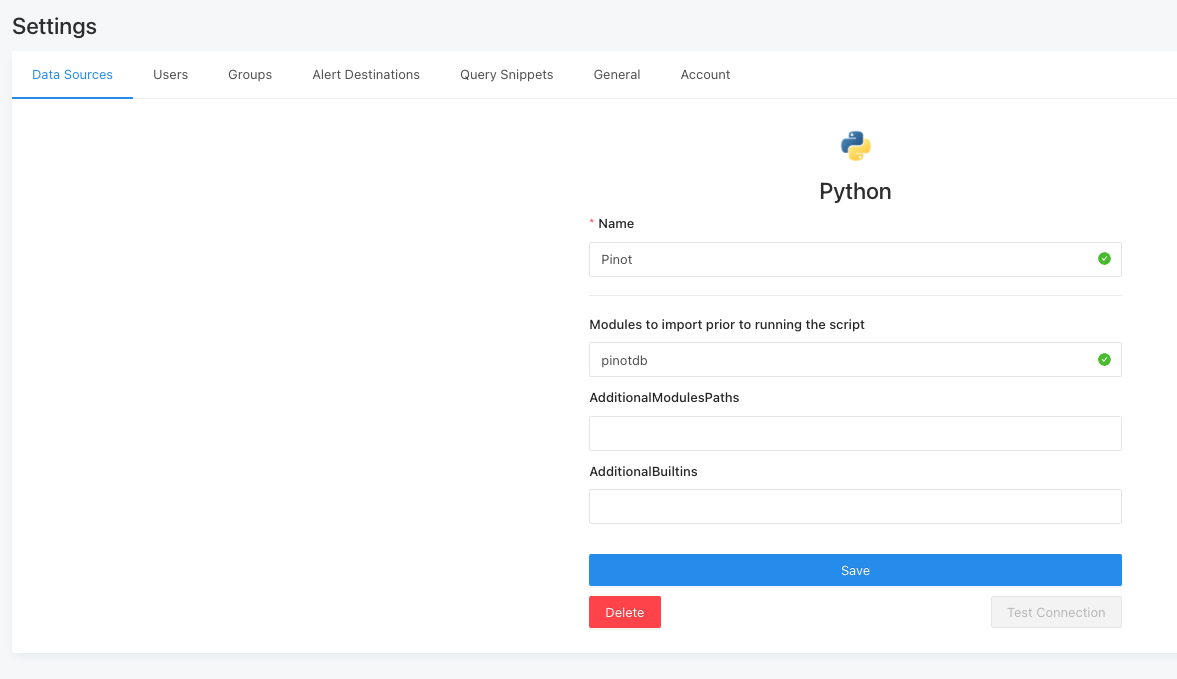 Now that we have a running Redash instance that can query Pinot. Let’s try to generate a few charts and add them to a dashboard.

Run the following command in a new terminal to spin up an Apache Pinot Docker container in the quick start mode. That container will have the baseball stats dataset built in.

Add the following Python code to the query editor.

The above code connects to Pinot and queries the baseballStats table to fetch the top ten players with the highest scores. The result is then transformed into a dictionary format supported by Redash.

Click Execute to see whether the query returns any results. Click on the Add Visualization tab to add a Bar Chart as follows. 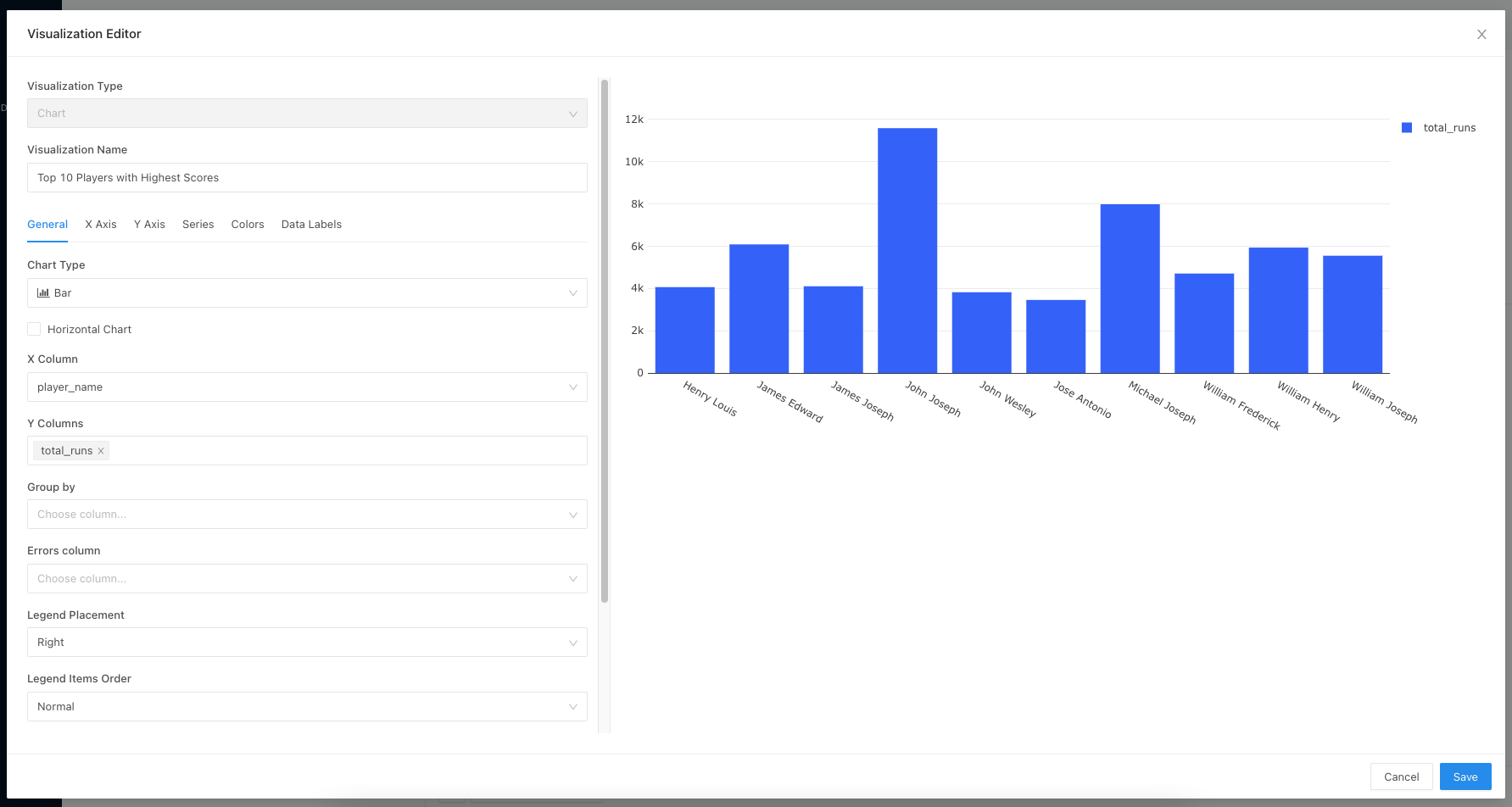 Click on the Save button to save the query with a meaningful name.

Similar to the above, add the following Python code to see the breakdown of teams who have scored the highest runs.

You can add a pie chart as the visualization.

The following Python code returns the total strikeouts over time.

You can create a line chart from the result as it shows the variation over time.

Finally, we can create a dashboard by piecing together the widgets generated by the three queries above.

Go to Dashboards > New Dashboards and add widgets accordingly. The final outcome should look like this:

Although there’s no direct integration, for the time being, you can still use Apache Pinot with Redash via a Python data source. You will have to write queries in Python, which invokes Pinot broker through the pinotdb Python client library.

You can also include libraries like Pandas to perform more advanced data manipulation on Pinot’s data and visualize the output with Redash.